Military Time Zones are vertical segments of the earth that have a similar time. The Earth is divided into 24 zones which each zone having a different time. Additionally, each Military Time Zone has its own name. The most famous Zone names are Alfa, Beta, Charlie, Delta, and Zulu.

To be honest, this topic is the most complicated topic out of all that is related to Military Time. The reason for this is because there are some math and physics to understand how the Military Time Zones work. But don’t be discouraged, I try to explain everything as simple as possible.

If you are interested in checking out the best military watches for men and women you can find them by clicking here (Amazon link).

Why Do We Have Different Time Zones?

As you should know, our Earth is round. That’s why it’s impossible for the Sun to shine on every part of the Earth at the same time.

The other reason why Sun can’t shine to each part of the Earth at the same time is that the Earth spins on its own axis. This is what causes the day and night to alternate.

Now think what would happen if we didn’t have Time Zones. That would mean that around the world, we would all have time same time.

For example, that would mean that it would be 0800 Military Time (8:00 AM) all around the world no matter what part of the day it is. Just imagine, people in New York would go to work at 0800 o’clock in the morning, people in London would be at lunch at this time, and people in Sydney would be sleeping in the middle of the night. Weird right?

This is the main reason that we need Time Zones. So that each one of us goes to work at 0800 Military Time (8:00 AM) and not to bed or to lunch at that same time. It would be really confusing to have the same time on the clock everywhere around the world.

TIP: Watch this video with a simple visual explanation of Time Zones.

I hope it makes more sense why we have different Time Zones now.

TIP: If you want to learn more about Military Alphabet Codes and its meaning, visit this article:

These Time Zone Codes are important for accurate and clear determination in military operations. With military names for time zones, militaries can avoid any confusion.

You can download this Military Time Zones – Printable Chart.

Note: Furthermore it is important to remember that there is no J (Juliet) for two reasons. J is not seen as a true letter of the alphabet in Latin and J also indicates local time.

So how many Military Time Zones are there? There are 24 Time Zones around the world and each Zone has designated a letter with the military phonetic alphabet word.

As with the Military Alphabet, the designations of Military Time Zones are also managed by NATO today. That’s why they are also known as NATO Phonetic Letters. And they are used not only by armies that belong to NATO but also by all other armies around the world.

TIP: You can try to find out what Standard and Military Time is in the different countries around the world by this Military Time Zone Current Time Converter:

Here is a visual to show you how the Earth is divided into Time Zones. As you can see the Time Zones are determined by the borders of states because it is more convenient for everyone.

TIP: Do you like this world time zones map? In fact, you can buy a very similar, but a far more beautiful map, here.

In the present days, not all countries follow the distribution of Time Zones hour by hour. For example countries like Iran, Afghanistan, and India use irregular time zones shifted by half an hour from neighboring countries.

TIP: As in the previous case with the world map, you can buy a very beautiful wall map with US time zones here.

You already know the Earth is divided into 24 Time Zones and each one has its own name and given letter.

But some of these Zones are better well-known than others. The most famous Time Zones are:

The Earth is round, and therefore it is 360 degrees around. We know we have 24 Time Zones, so each Time Zone is 15 degrees.

Imagine the earth, divided like slices of an orange, and each slice is a one-time zone.

But which “slice” is the master slice? The master Time Zone is Prime Meridian (also known as Zero longitude) from which all other Time Zones are determined.

What does UTC mean?

UTC means Coordinated Universal Time, and this concept was adopted in 1960. It’s a time standard based on International Atomic Time and it is started from noon. Known as Zulu Time Zone with the letter Z.

UTC replaced GMT as the World Standard for Time but occasionally is confused with GMT, which is described below.

What does GMT mean?

GMT means Greenwich Mean Time was adopted in Great Britain by the Railway Clearing House in 1847.  This time standard is based on Earth rotation and it is started from midnight.

TIP: If you want to know more about Military Time History, visit this article:

Was this topic hard to understand? I have to say that it is also hard for me to understand Military Time Zones correctly. But, I hope this article was helpful to you.

To summarize this topic, the most important points are:

Feel free to use the attached Military Time Zone Chart and Maps anytime you want to gain confidence in this topic.

And that’s all! If you are still interested in topics related to Military Time feel free to visit other articles in the categories below: 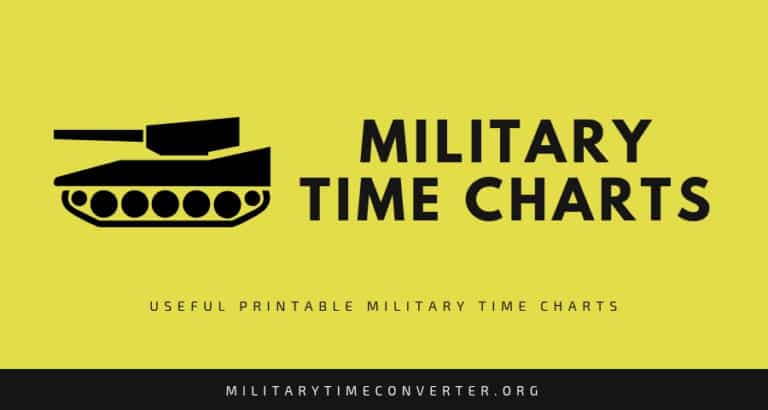